Is Radon High in Virginia?

Typically, because it’s easy and inexpensive, it’s best to order a radon testing kit regardless of the risk in your area. Houses and buildings in low-risk areas can still have high levels of radon. Not only that, but the factors that contribute to radon can be highly localized.

That said, is radon high in Virginia? Yes, there are some regions of Virginia that fall into EPA’s Zone 1 risk category (greater than 4 pCi/L). These are especially prevalent on the west side of the state and run along the Blue Ridge Mountains. The Virginia Department of Health has estimated that there are roughly 700 cases of radon-caused lung cancer in Virginia.

However, it can still be important to understand why Virginia has these high-risk areas. When you understand the geology of radon, it helps to explain the need for tests in all areas, not just in high-risk regions. 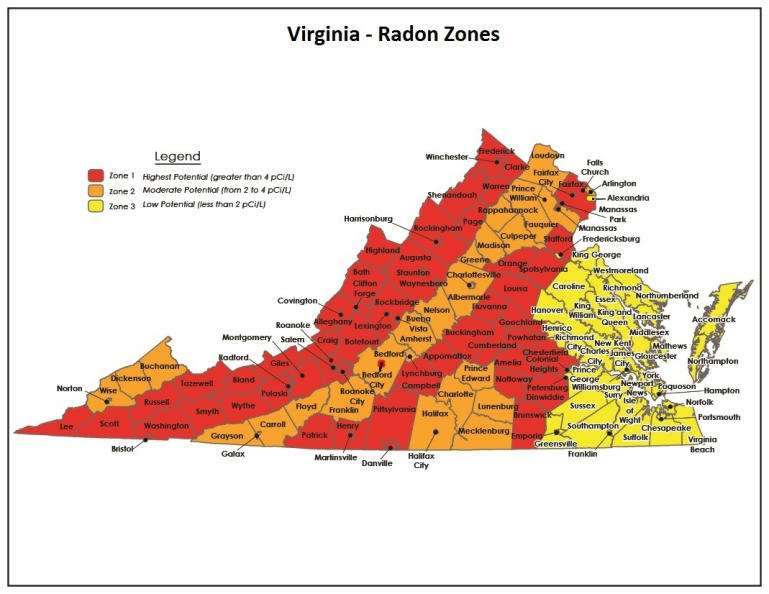 The EPA developed a map in 1993 with the counties of the United States broken down into three zones of risk level. They made this map using geology, aerial radioactivity, soil types and foundation types. They supplemented all of this information with indoor radon measurements, reiterating the need for site testing by location.

Where Does Radon Come From?

Radon is an odorless, colorless, radioactive gas that is thought to be the second leading cause of lung cancer. There are no immediate symptoms to being exposed to radon. Instead, there is an increased risk of lung cancer.

Why Does That Pose a Risk to You?

The reason radon gas can be found in a house is because uranium is an element that is found in rocks. Just about every type of rock can have some level of naturally-occuring uranium. Some have more than others.

Most rocks don’t have enough to be radioactive on their own. However, with enough time, uranium becomes radon and is either trapped with the rock or in air pockets within the rock. If there was enough naturally-occurring uranium in the rock to begin with, there will be a significant amount of radon in the rock’s air pockets. There will also be some amount of radon being released into the air, water or soil surrounding the rock.

When these rocks are crushed, they release the trapped radon gas into the atmosphere. Radon gas can also escape through porous soil or through the water table.

Radon in Homes or Buildings

Once radon gas has escaped, it naturally disappears into the atmosphere without danger. However, it can find its way into an enclosed space like a home or building. This can especially be the case when the construction process disturbs radon-rich soil and rocks while laying the foundation.

What Increases the Risk of Radon Gas in Virginia?

Now that we’ve explained where the threat of radon gas comes from, it makes sense why the EPA highlights some regions as being higher risk for radon than others.

If a region has one or several of the following, it’s probably at a higher risk for radon:

When the nuclear power plant worker set off the radiation detector in Pennsylvania, the Pennsylvanian government tested homes around the state for radon. It discovered a pattern of radon that lined up the Redding Prong, a geological structure that occupies a portion of East Pennsylvania.

In Virginia, there are a few Triassic Basins that can pose a similar risk as the Redding Prong. With enough uranium deposits close to the surface, there is plenty of reason to suspect any home in Virginia could pose some risk for radon.

Why Every Home Should Be Tested for Radon

It’s important to understand that the higher risk for radon in some regions is just a higher probability of radon exposure. It’s not a guarantee. Likewise, a lower risk region is not guaranteed to have lower amounts of radon. It’s just less likely to have dangerous levels.

Because all rocks have some uranium in them, the risk for radon gas is never zero. There is always some amount of radon in the air. It is only when an unlucky set of conditions are met that radon gas becomes concentrated enough to be dangerous.

That’s why the only surefire way to know if a home or building has a dangerous level of radon gas in it is to test for it.